Lok Sabha elections will begin on April 11 and will be held over seven phases followed by counting of votes on May 23, the Election Commission has announced on 10 March, 2019.

Chief Election Commissioner Sunil Arora said the model code of conduct would come into immediate effect from March 10 and 10 lakh polling stations would be set up this time as against about 9 lakh in 2014. 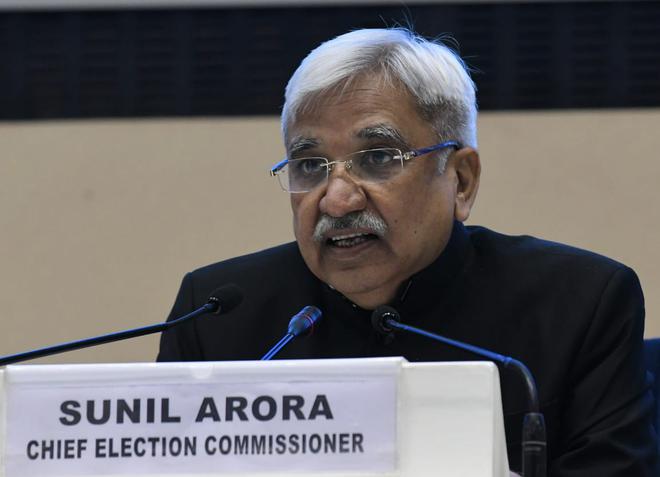 Announcing the schedule for 2019 Lok Sabha polls, the Election Commission said the ‘voter verifiable paper audit trail’ (VVPAT) will be used in all polling stations this time. The first phase will be held on April 11, second on April 18, third on April 23 and fourth on April 29, fifth on May 6, sixth on May 12 and seventh phase on May 19. Counting of votes for all seven phases would be done on May 23, the EC said. Anantnag Lok Sabha seat in J&K would vote in three phases due to security reasons, the ECI said.

Among other things, the model code of conduct bars the government from announcing any policy move that may impact voters’ decision. The ECI said all political advertisements on social media will need pre-certification.

Prime Minister Shri Narendra Modi has given best wishes to the Election Commission, all those officials and security personnel who will be on the field, across the length and breadth of India assuring smooth elections. India is very proud of the ECI for assiduously organizing elections for several years, he said.

PM Shri Modi said, “The festival of democracy, Elections are here. I urge my fellow Indians to enrich the 2019 Lok Sabha elections with their active participation. I hope this election witnesses a historic turnout. I particularly call upon first time voters to vote in record numbers. 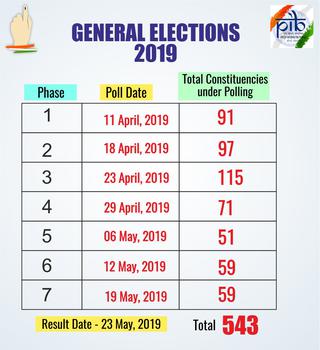 Assembly polls in Andhra Pradesh, Arunachal Pradesh, Sikkim and Odisha will be held simultaneously with the respective Lok Sabha constituencies.

President’s rule to continue in J&K

On J&K, the ECI said security situation is being monitored. Regarding holding elections ECI has sought info from the State administration. EC has assessed the ground situation and preparedness for the polls, also considering recent developments, sought comments from MHA and also visited the State, had meeting with all political parties and administration officials, based on the findings and availability of forces, EC has decided to announce only the parliamentary elections in the State, decision on holding Assembly elections to be taken soon, he says. So, Assembly elections in Jammu and Kashmir not to be held along with Lok Sabha polls.

Next Lok Sabha elections to see paper audit of vote at cost of Rs 3,200 cr

Amid complaints that Electronic Voting Machines (EVMs) could be rigged and the voter never got to know which candidate he had actually voted for, the Union Cabinet today sanctioned Rs 3,200 crore over the next two years to enable the Election Commission of India (ECI) to procure voting machines that use Voter Verifiable Paper Audit Trail (VVPAT) Units for use in the next Lok Sabha elections in 2019.

Bahujan Samaj Party (BSP) leader Mayawati and Aam Aadmi Party (AAP) chief Arvind Kejriwal, whose parties have posted a less than-satisfactory electoral performance in the last round of assembly elections had complained that votes cast by their supporters had not been correctly recorded by EVMs. They had demanded that VVPAT machines be installed all over India. VVPAT machines produce a printout of the vote cast using an EVM, which can be shown to the voter to dispel any doubts. This printout is then deposited in a box and can be used to resolve any dispute regarding theelection. In 2013, the Supreme Court had ordered the EC to implement the VVPAT system in a phased manner, and the commission had committed to have it in placeby the time of the 2019 general elections.

However, the government was tardy in addressing the requestand in February this year the ECI wrote to the Law Ministry that if orders were not placed immediately, it would not be possible for the machines to be ready in time for the general elections and the simultaneous assembly elections due2019.

The cabinet has today accepted the ECI’s demand in toto to procuremachines that cost Rs 19, 650 each. The total cost of the order is around Rs 3,173 crore which will be spread over the next two years – 2017-18 and 2018-19.The contracts will be given to Bharat Electronics Ltd Bangalore and Electronics Corporation of India, Ltd, Hyderabad. Rs 1,600 crore will be provided in the current financial year in the supplementaries/ Revised Estimates for meeting the cash outgo envisaged for purchase of EVMs and VVPAT Units during 2017-18, payment of 40 per cent as advance to the manufacturers and the balance as maybe required in the BE 2018-19.

The decision of the Cabinet means VVPAT Units will be used in all poolingbooths in the General Elections, 2019, which will act as anadditional layer of transparency for the satisfaction of voters, allaying any apprehension in the minds of the voters as to the fidelity and integrity of the EVMs. This would also result in compliance of the directions of the Hon’ble Supreme Court vide its Order dated 8 October, 2013, a release said.

The idea of an additional layer of transparency to satisfy voters was mooted by politicalparties in October, 2010. 20,300 VVPAT units were purchased by the ECI in 2013 and since then, these have been utilised in select Assembly and Parliamentary Constituencies. Subsequently, order for 67,000 additional units was placed in 2015, out of which 33,500 units have been supplied by the manufacturers.

The Commission had recently received a memorandum from 16 parties demanding that the paper ballot system be reintroduced for greater transparency. The Bahujan Samaj Party, the AAP and the Congress have alleged tampering of EVMs. The Samajwadi Party has also raised doubts.

The EC had given about a dozen reminders to the government, seeking funds for the paper trail machines. Last year, the CEC had also written to Prime Minister Narendra Modi on the issue.

During the last Parliament session, several members allegedthat the voting machines used in the recently concluded Assembly elections weretampered with.

Earlier this week, a delegation of representatives from 13 Opposition parties met President Pranab Mukherjee and flagged a range of issues, including that of EVM security.