Opposition’s statements has brought a smile on our enemy’s faces: PM

Hitting out at Opposition parties for questioning the recent air strike in Pakistan, Prime Minister Narendra Modi on Sunday said, “Instead of boosting the morale of our armed forces, some people are asking for proof of the strike and the Opposition’s statements brought smile on the faces of our enemies.”

He was addressing the NDA’s sankalp rally at the Gandhi Maidan in Patna. “We are proud of our armed forces, but some people in our country are making statements which have brought smiles on our enemy’s faces,” he said. “But, your chowkidar is standing rock solid before them for the security of the country and protecting the interests of the poor people,” he said. 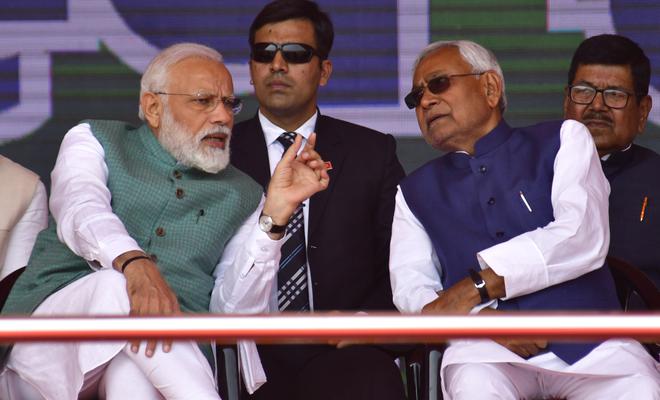 He said, “The new India that is surging ahead will not sit silent over the martyrdom of its brave soldiers. It will take revenge point by point.”

Leaders of the BJP, JD(U) and Lok Janshakti Party were present on the dias along with the Prime Minister. Mr. Modi said, “For the first time in 50 years, India was recently invited to the Islamic countries conference,” and “its voice was heard with respect.

“The Crown Prince of Saudi Arabia too had come here and he increased the quota of Haj pilgrims to 2 lakh for Indian Muslims on my request. He also declared the release of 850 Indian prisoners arrested in his country on flimsy charges,” he said.

“This reflects another example of our respect in world community, but it also reflects what Congress was doing when it ruled the country,” he added further.

While slamming the Opposition parties for coming together to contest him, Mr. Modi said, “My priority is to appeal people to come to end terrorism but they say come to finish Modi; I say come to end poverty, corruption, black money, malnutrition, unemployment and fight for cleanliness but they [Opposition] are cobbling together to fight Modi,” he said.

“But the people of the country have decided to punish them once again,” he added. “Every year, ₹75,000 crore will be given directly to the bank accounts of farmers of the country,” Mr. Modi said, addressing the issue of farmers distress.

He further listed several achievements of his government and programmes initiated for development in Bihar. He also thanked Bihar chief minister Nitish Kumar for “giving new direction to Bihar and taking it out from those dark days”. “Today Bihar has got a better atmosphere for business activity,” he said.

Mr. Kumar thanked Mr. Modi for helping Bihar with several schemes and welfare measures. Mr. Kumar and Mr. Modi are sharing the dias after nine years. In 2010, they addressed an NDA rally together in Ludhiana, Punjab.

The State NDA leaders claimed it as a “historic rally” in the political history of Bihar as over five lakh people were in attendance.

Raking up 84 riots, PM slams Cong for lecturing on intolerance

In a stinging counter-attack on Congress for raising the issue of “intolerance”, Prime Minister Narendra Modi today raked up the 1984 anti-Sikh riots saying it should hang its head in shame for the carnage instead of doing the “drama” of lecturing the NDA government.
“Today is November 2. Do you recall 1984? Lakhs of Sikhs were massacred in Delhi and across India on the second, third and fourth day of Indira Gandhi’s killing in which serious allegations were made against Congress and its leaders. Today, on the same day, Congress party is giving lecture on the issue of tolerance. ‘Doob maro, doob maro’. This does not behove you.
“The tears in the eyes of the Sikh victims have not yet dried. Their wounds have not healed and you are doing this ‘dramebaazi’ on November 2,” the Prime Minister said addressing an election rally in Seemanchal region of Purnea where the last phase of Bihar polls are due on November 5.
The remarks of Modi came as the Congress top leadership decided to meet President Pranab Mukherjee to raise the issue of “intolerance”.
It also came a day after Congress President Sonia Gandhi voiced concern on the issue at a function in the national capital and vowed to fight the “diabolical design” of divisive forces to spread hatred, which posed a threat to the unity of the country.
Taking a dig, Modi “thanked” Bihar Chief Minister Nitish Kumar and RJD chief Lalu Prasad for giving 40 seats to Congress saying these seats will easily come in BJP’s kitty.
“Both Lalu ji and Nitish Ji have been fighting against Congress for long. There may be some compulsion of both of them that they have given forty seats to Congress, a party which is non-existent in Bihar.
“I am thanking both of them for one thing that both gave us 40 seats without a challenge. We have thus got the 40 seats on a platter. I thank Lalu ji and Nitish ji for these 40 seats given to Congress. For the rest, I am thanking people of Bihar,” Modi said.
The Prime Minister also held that Nitish Kumar’s rise in the state politics was due to “blessings” of the then Prime Minister Atal Bihari Vajpayee and people voted for him as they were desperate to get rid of ‘jungle raj’.
“People had faith in the capability of Vajpayee ji. Hence they supported you. Now you no longer have Atalji’s blessings. People will not trust you,” he said, claiming that Mahagathbandhan leaders are “scared” of his visits to Bihar.
“You ask again and again why does Modi come to Bihar? Is it a crime that Modi is coming here? Are you afraid of being exposed. You are trying to create a scare of Modi and telling people that this or that will happen if Modi comes here.
“You have played on this fear for last many years. Despite that people reposed faith in me. I have come here because of the trust of people in me,” Modi said.
Expressing confidence that BJP will form a government in the state with two-third majority, the Prime Minister said that both Lalu and Nitish have only six days left.
“You play as many games as you can in these six days. People of the state will settle the scores on November 8,” Modi said, telling the electorates that he is seeking votes in the name of development and made repeated references of the Rs 1.65 lakh crore package for Bihar.
Drawing the allegory of a scooter having fallen into a well, Modi reiterated his “double engine” growth theory for Bihar saying the state will come out of the morass only if engines of both Centre and state work together. He also targeted Kumar over his “unfulfilled” electricity promise and vowed to provide power to all households in Purnea.
The Prime Minister’s repeated barbs at Congress come in the BJP stronghold at a time when Congress fortunes do not appear very high in the region.
Purnia town is one of seven constituencies of the district which will go to polls on November 5. The seat was won by Congress last in 1969. It had later turned into a strong bastion of Communist Party of India-Marxist (CPI-M).
CPI-M’s Ajit Sarkar, who won the seat 1980, held it for18-long years till 1998 when he was murdered.
-02 November 2015 | PTI | Purnea