Parliament on January 09, 2019 cleared the Constitutional Amendment Bill guaranteeing 10% quota in education and employment to economically weaker sections in the general category, following an approval by the Rajya Sabha. The Upper House nod came following an over nine-hour-long heated debate, during which the Opposition accused the government of bringing the Bill in haste with an eye on the coming Lok Sabha election.

The AIADMK staged a walkout vehemently opposing the move, while some other political parties, including the DMK, the Left and the AAP demanded that the Bill be sent to a Select Committee.

DMK’s Kanimozhi, supported by several members, sought a division of vote on her motion for referring the Bill to a Select Committee. However, it was defeated with just 18 votes in favour. Then the CPI and the AAP members walked out in protest. The Bill was passed with a majority of 165 against seven votes. It will be now sent for Presidential assent.

The Constitution (124th Amendment) Bill was introduced by Minister of Social Justice and Empowerment Thawar Chand Gehlot, who later in his reply said that the existing reservation to the SCs, STs and OBCs would not be touched by the amendment. 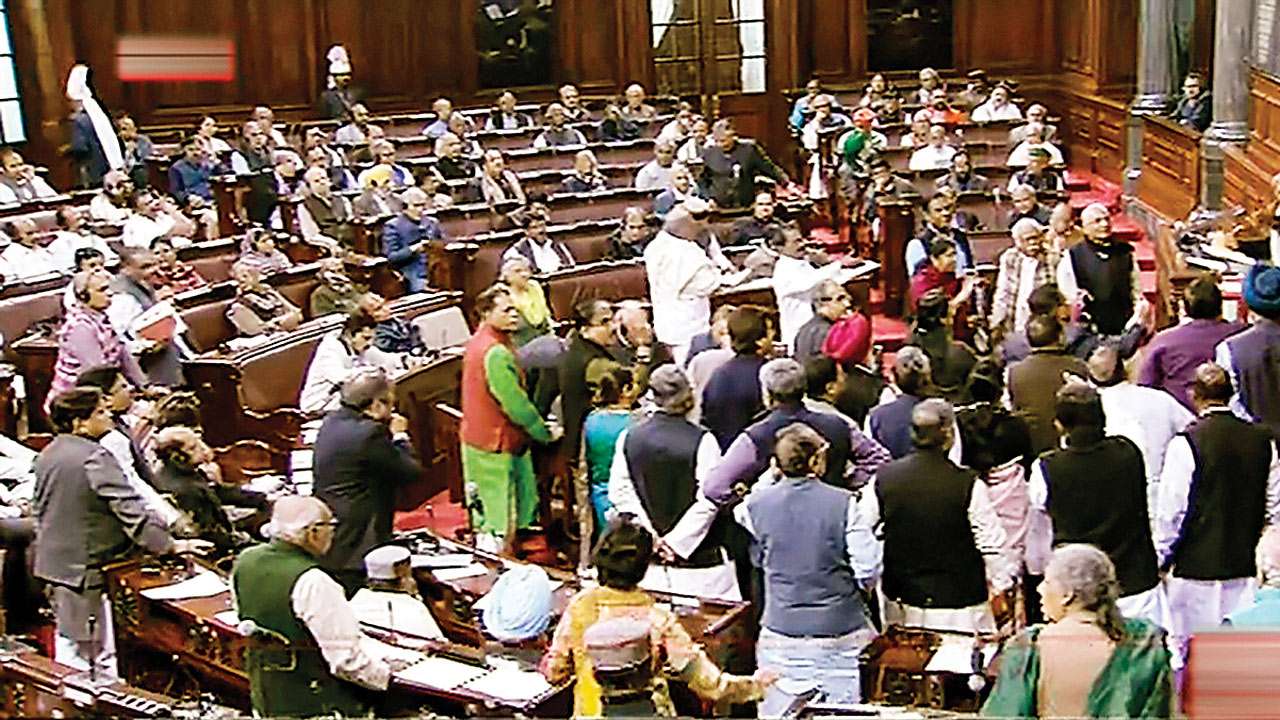 Clarifying the Bill’s provisions, Law Minister Ravi Shankar Prasad said the reservation would be applicable to jobs in both Central and State governments, adding that the legislation gave powers to States to determine the economic criteria for identification of beneficiaries. He responded to the Opposition’s charge of political intent by terming the government move a “slog-over six”, with many more to come.

Earlier, during the debate, Congress leader Anand Sharma said provisions under Articles 15 and 16 of the Constitution were for the backward and weaker communities. In the past, attempts were made twice to extend reservation beyond their scope, but the Supreme Court struck them down. The same happened in several States.

Stating that it took the BJP-led government over four years to bring the Bill in the last session, Mr. Sharma questioned the circumstances and the manner in which it was taken up — pointing out that the party had lost recent Assembly polls in five States. Also questioning the economic criteria set for extending the quota, he said not many people would benefit from it especially when the government had failed to create enough jobs.

Mr. Sharma also asked the government to extend parliamentary session further to bring in the Women’s Reservation Bill for passage.

Member Kapil Sibbal listed three hurdles that the law would have to surpass. There was complete non-applicability of mind on the government’s part, its constitutionality could come under judicial scrutiny and that the implementation part was not clear, he said.

Samajwadi Party’s Ram Gopal Yadav demanded 54% quota for OBCs, as the government had now opened up the doors by breaching the 50% cap fixed by the Supreme Court. Although he supported the Bill, he said the Centre had failed to even provide proper reservation to the SC, ST and OBCs. “When there are no jobs, what is the meaning of reservation?,” he said.

Derek O’Brien of the TMC accused the government of cheating the poor and the youth. “The Trinamool Congress is disgusted. We are angry that Parliament has been disrespected, completely disrespected and this is the wrong method which has been used here,” he said, stating that it was a political move by the government in the face of a projected poor performance in the coming Lok Sabha elections.

Referring to various government schemes, the TMC leader said they were all “Cheat India” and the proposed law was yet another attempt to mislead people.

Stating that the Bill had been brought without any empirical basis, AIADMK’s Navaneethakrishnan quoted a Supreme Court order, stating: “A Backward Class cannot be determined only and exclusively with reference to economic criterion. It may be a consideration or basis along with and in addition to social backwardness but it can never be the sole criterion”. He said the Bill trampled upon the rights of people in Tamil Nadu, which already had 69% reservation.

Mr. D. Raja also questioned the haste with which the Bill was brought in. He said it was signed on January 7, introduced and passed by Lok Sabha on January 8 and then taken up in Rajya Sabha. He dared the government to bring reservation in the private sector. BSP’s Satish Chandra Misra said the Bill came after the meeting of his party supremo and Samajwadi Party chief for a possible pre-poll alliance in Uttar Pradesh.

About 40 members of various parties participated in the debate, which culminated in the Bill being passed within 48 hours of being introduced in the Lok Sabha.

Passage of The Constitution (One Hundred And Twenty-Fourth Amendment) Bill, 2019 in both Houses of Parliament is a victory for social justice.It ensures a wider canvas for our Yuva Shakti to showcase their prowess and contribute towards India’s transformation.

By passing The Constitution (One Hundred And Twenty-Fourth Amendment) Bill, 2019, we pay tributes to the makers of our Constitution and the great freedom fighters, who envisioned an India that is strong and inclusive”, the Prime Minister said.