On 25 May 2018, Four years of Narendra Modi will complete as prime minister. During this time, the Modi government has taken several decisions on economic policy, of which nine are key. 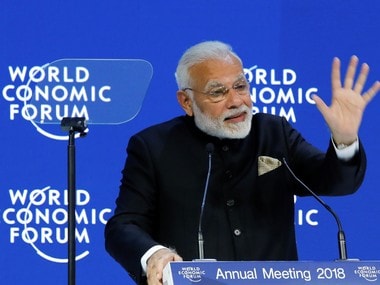 From financial inclusion to identity and attack on black money to corporate insolvency, these policies have dominated the discourse over the past 48 months. Some of these policies are extensions of past ideas, a work in progress taken forward — Aadhaar or the Goods and Services Tax (GST), for instance. Others, like demonetisation and the Insolvency and Bankruptcy Code, are new ideas.

In some such as GST, the government received cooperation from Parliament, the States and the media. In others, notably demonetisation, it didn’t. For good or for bad, these policies (one each in 2014, 2015 and 2017, and six in 2016) define the direction of the Modi government’s economic thinking. Should Modi return to power in 2019, we know the foundations upon which new policies would be built. Should he lose the 2019 elections, it would still push the next government in the same direction, not unlike how Modi has strengthened Aadhaar and extended the MGNREGA. This essay evaluates these nine policies.

Three months into the Prime Minister’s Office, Modi launched the Pradhan Mantri Jan Dhan Yojana, with a festivity of financial records and a flood of political slogans. A scheme to deliver financial inclusion from the top, Jan Dhan Yojana helps unbanked Indians open a bank account, get a debit card, and access to social security schemes like insurance and pension.

In terms of numbers, it has enabled the financialisation of India at a never-seen-before scale — on 17 January 2018, there were almost 310 million beneficiaries, three-fifths of them in rural areas, with a total balance of Rs 73,690 crore. With an average balance of Rs 2,377 per account, this shows that despite there being no minimum balance requirements, the first steps of unbanked Indians towards organised finance have been taken. Critics have raised issues of privacy and security and these would likely get ironed out, going forward. But nobody can deny the advantages of the poor having access to modern finance.

The Arbitration and Conciliation (Amendment) Act

Nineteen months into his tenure, the Modi government brought in a law that speeds up the arbitration of commercial disputes, by getting the Arbitration and Conciliation (Amendment) Act (ACAA) passed in Parliament.

Although the skeleton of the law is as old as 1899 through the Indian Arbitration Act, its evolution and adaptation to conditions of Independent India has been long. ACAA ironed out legislative and legal wrinkles such as the role of “Courts sitting in judgement over the arbitrators, before arbitration, during arbitration and after arbitration,” as the Justice Saraf Committee on Arbitration noted. The new law has also smoothened out conflicts of interest and brought disclosures by arbitrators into the law.

Most important: all arbitrations now must end within 12 months, giving the original objective of arbitration — speed — the force of law.

In its 23rd month, the Modi government cleared the cobwebs of stalemate between the government and private companies in the energy sector through the Hydrocarbons Exploration and Licensing Policy (HELP), replacing the 19-year-old New Exploration Licencing Policy (NELP).

In terms of execution, the fiscal model of HELP, under which oil and gas fields are auctioned to companies, has shifted to revenue sharing from NELP’s profit sharing, a major reason for stalemate in the sector. This will reduce the micromanagement of company expenses, which in turn lowers the regulatory burden and administrative discretion. The policy also gives a uniform license for exploration and production of all forms of hydrocarbon like coal bed methane, shale gas and oil, tight gas and gas hydrates.

This replaces NELP’s hydrocarbon-specific policies — often, while exploring for one type of hydrocarbon, a different one would be found and companies needed a separate licence for it — and gives a greater marketing and pricing freedom for natural gas (crude oil already had this freedom). But whether HELP will deliver what NELP couldn’t remains an open question for now.

On 26 March 2016, the Modi government’s 23rd month in power, Aadhaar, an identity mapping tool launched by the United Progressive Alliance in January 2009, was strengthened, taken forward and institutionalised. In a country, where elections are won on promises of basic benefits, ensuring that they reach the targeted beneficiaries has remained a challenge for wealth distributive policies, from wages to pensions.

While Aadhaar functioned under the Unique Identification Authority of India (UIDAI), the body lacked statutory support. As a result, the Modi government proposed and Parliament enacted the Aadhaar (Targeted Delivery of Financial and Other Subsidies, Benefits and Services) Act. Today, Aadhaar has become India’s most credible identity currency, and is used while filing taxes, and buying financial products like mutual funds. This along with linking direct benefits such as the public distribution system, employment guarantee schemes, cash transfers to the poor, and opening bank accounts, has been challenged in various courts, and objections to the State collecting personal information like fingerprints and iris scans raised.

While these will get sorted out one way or another, Aadhaar has the potential to become one of India’s major soft power exports.

The Insolvency and Bankruptcy Code On 18 May 2018, Bamnipal Steel, a Tata Steel subsidiary, acquired a controlling stake of 72.65 percent in the ailing Bhushan Steel for Rs 35,200 crore. While the import of this news was lost in the din of Karnataka elections, this is the first large bankruptcy resolved under the Insolvency and Bankruptcy Code (IBC), a new law that the Modi government proposed in its 24th month and Parliament enacted.

In tune with its primary focus — time-bound resolution of corporate insolvency — the deal is a landmark first step towards ending crony capitalism.

According to the World Bank, against the 2016 world average of 2.5 years to resolve insolvency, it took Japan 0.6 years, Singapore and Canada 0.8 years, the US 1.5 years and China 1.7 years. The figure for India: 4.3 years. The IBC aims to consolidate and amend the laws relating to reorganisation and insolvency resolution of corporate persons, partnership firms and individuals in a time bound manner for maximisation of value of assets of such persons, to promote entrepreneurship, availability of credit and balance the interests of all the stakeholders. It amended 10 Acts of Parliament and establishes an Insolvency and Bankruptcy Board of India that has regulatory oversight over the insolvency professionals, insolvency professional agencies, and information utilities and is responsible for implementation of the Code.

In a line: this law allows easy exit from a failing business.

The 31st month of the Modi government saw a tightening of a law against black money in property. India’s long war against unaccounted-for, tax-evaded money has been through what is known as ‘benami’ transactions through the purchase of property in one person’s name but financed by another, who also controls it.

The 1988 Benami Property Transactions Act was weak — no powers of a civil court, no specific provisions for vesting of confiscated property, no appellate structure defined. The Benami Transactions (Prohibition) Amendment Act, in force since 1 November 2016, empowers authorities to provisionally attach and eventually confiscate benami properties. It also carries jail terms of between one and seven years and a fine that can be upto 25 percent of the fair market value of the property.

Within six months of the Act coming in force, the authorities identified more than 400 benami transactions, including deposits in bank accounts, plots of land, flats and jewellery, with more than 240 properties with a market value of more than Rs 600 crore being provisionally attached.

The 31st month also brought in what is arguably the most controversial, disruptive and critiqued policy of the Modi government — demonetisation. In his 8 November 2016 address to the nation, Modi announced that Rs 500 and Rs 1,000 currency notes would cease to be legal tender that midnight.

By tuning into corruption at high places and the widespread black money in the economy, Modi articulated a political angst against “anti-national and anti-social elements.”

An additional objective of this scheme was curb fake currency and terror financing from across the border. As reports of individual and small business hardships flooded the nation, and 98.96 percent of the notes returning back to the banking system, demonetisation ended up creating acute individual distress that Finance Minister termed ‘anecdotal’. It hit real estate, slowed growth due to reduced demand, disrupted supply chains, and increased uncertainty. Additionally, it caused a decline in cash-sensitive stock market sectoral indices like realty, fast-moving consumer goods and automobiles, and hurt the informal, cash-driven economy. Hardship aside, demonetisation has forced unaccounted-for money to flow into the banking sector, which can and is being tracked.

Modi’s 31st month had one more key policy: the introduction of the Real Estate (Regulation and Development) Act. One of the striking and tragic contradictions of India’s policymaking has been around real estate.

From acute housing shortages and lack of developed land to speculator-driven bubble-like asset prices with unaccounted-for income and an overriding ecosystem of personal, corporate and government corruption, has placed citizens at the mercy of forces that manipulate markets. The need for a regulator to have an oversight on this complex industry has been languishing for more than a decade.

Complicating the issue is that while land and its development is a State subject, consumers are mobile, migrating from one state to another with ease. This law attempts to fix these problems by establishing a regulator to oversee the sector and “protect the interest of consumers in the real estate sector” through an adjudicating mechanism and Appellate Tribunal. Unfortunately, this law needs to be enforced by State governments, most of which have notified it, but are dragging their feet on the consumer interest side. Unless he revives it, RERA could turn out to be Modi’s biggest policy failure.

Modi’s biggest reform push, with the greatest impact to public finances, and the strongest tool against tax evasion and arguably the most complex law in the history of Independent India’s — the introduction of the goods and services tax (GST) — was launched in the 39th month of his term.

The enabling mechanism was provided by the enactment of the Constitution (One Hundred and First Amendment) Act, following which Parliament enacted four Central laws. Further, all the 29 States enacted enabling laws in their Assemblies, while the Centre notified it for all the seven Union Territories.

The GST replaces eight Central taxes and nine State taxes, but leaves five petroleum products and alcohol for human consumption out of its ambit. In tune with indirect taxes in 140 other nations, Modi has brought to completion one of India’s longest reforms — the GST story began more than three decades ago, in 1985. The structural reform over, minor tinkering will continue, though criticism about its implementation, particularly the huge compliance burden for small enterprises in its initial launch, was needless, bureaucratic and not thought through.